Home/An Introduction to Palmistry
Previous Next

One of the oldest forms of psychic reading and extrasensory perception, palmistry has been practiced for millennia across the entire world. Palm reading involves reading the lines, shapes, mounds, nails, and layout of an individual’s hand to gain insight into the person’s personality and future.

Palm reading understands that both the left and right hand contain secrets about different parts of our lives, and that a well-trained professional can sus out significant information pertaining to your happiness with life and your future. Palm reading pays special attention to the life line, head line, heart line, and fate lines.

Please note that the range of information that can be gleaned from palm reading is quite large, and includes information on topics as varied as your career, family, love life, financial prospects, and even the state of your health. If you’re interested, read more about different types of psychic readings, otherwise let’s go deeper. 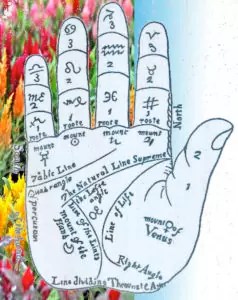 While there is a great deal of doubt about where palm reading first originated, it is known that palmistry was historically practiced in both India and the rest of South Asia. In addition, many of the oldest written information that we have on the subject can be found in ancient Indian texts and temples.

We do know that palm reading was practiced throughout the Middle East as far back as 5,000 years ago. During this time period, there were no overarching rules that governed this psychic ability. People were taught who to read palms from their relatives and neighbors, and each psychic medium had a different technique and approach. It was not until much later that the field gained a single approach to the subject.

While we know that palm reading was practiced extensively throughout Asia and the Middle East as far back as 5,000 years ago, there are no records that speak of palmistry in western Europe until the 1400s. The first mention of this practice in modern England was in 1440, when a manuscript known as the Digby Roll IV was written.

The Three Branches of Palmistry

Chirognomy involve studying and gleaning information from the basic shape of someone’s hands. This technique was not fully developed until the 19th century, but involves assessing the thickness and shape of an individual’s palm, thumb, and fingers.

Chiromancy, on the other hand, refers to studying the lines of the hand itself, and does not concern itself with the larger shapes and characteristics of the hand. According to this approach, major emotional events leave a mark not only on the psyche and aura of an individual, but also on their hand as well. A well-trained psychic can use these lines to gain insight on an individual’s current state of mind and future.

Dermatoglyphics is the study of fingerprints, palm patterns, and skin patterns. An experienced practitioner can determine personal characteristics and the future of a person by studying their fingerprint patterns, the shape of the palm, and the actual pattern of their palm’s skin.